A state takeover would only make HISD worse

A state takeover would only make HISD worse [Opinion]

By Alpa Sridharan, Coretta Mallet-Fontenot and Carmen Dueñas May 3, 2019 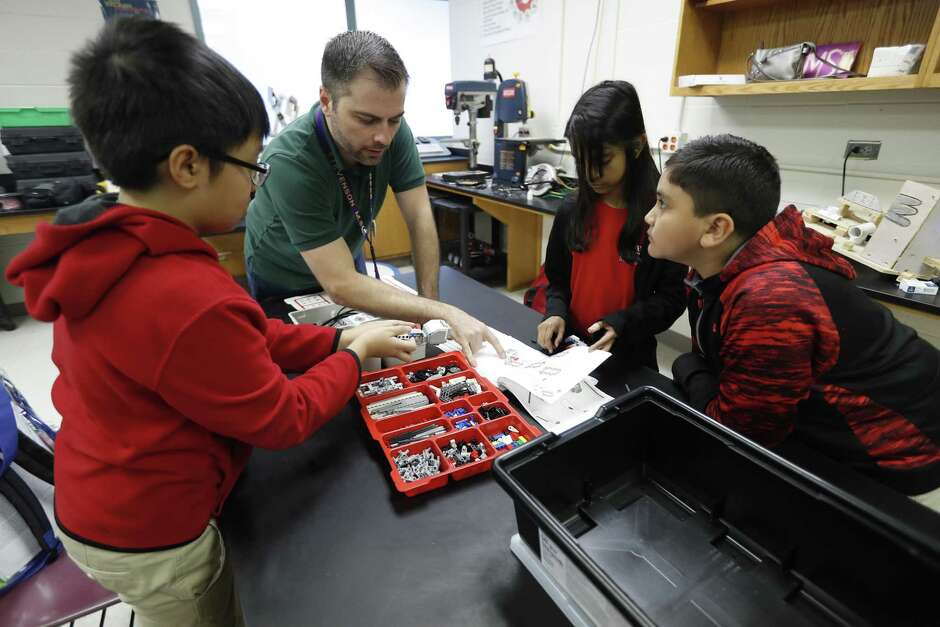 Stevenson Middle School isn’t one of the four HISD schools that have failed to meet TEA standards. But like the rest of HISD, it could be taken over by the state agency.
Photo: Karen Warren, Houston Chronicle / Staff photographer

The unrelenting threat of takeover by the Texas Education Agency has brought more instability to Houston ISD. As media and public attention focus on missteps by the sitting school board, we need to remember the facts.

Under our current board of trustees, which finally reflects the diversity of our students and of Houston, the number of “improvement required” schools has decreased to 27 in 2017, down from 58 in 2015 — all while under the pressures of a budget wrecked by state “recapture,” as well as thepossible TEA takeover.

Today the Texas Education Agency threatens to take over all of HISD based on the performance of only 1.4 percent of district schools. Four schools, to be precise: Kashmere High, Wheatley High, Patrick Henry Middle and Highland Heights Elementary.

The solution moving forward is not more instability. HISD should support and retain teachers better, expand investment in its Community Schools program, continue improving opportunities for students with disabilities, stabilize school leadership and stop the unrelenting focus on high-stakes testing.

Last year, HISD began the Community Schools program by investing in wraparound services at schools across the district. This essential program addresses students’ health by offering counseling and wellness services and connecting schools to organizations that provide direct social services.

Even with its problems, HISD has a better recent track record for meeting the needs of students with disabilities than TEA. After inadequately serving the needs of Texas’ Special Education students for years, the state indicated that it will not develop a meaningful plan until June 2020.

HISD has made strides recruiting strong teachers to high-need schools, but must do a better job supporting and retaining teachers. At schools under the threat of takeover, teachers and students face a culture fixated on STAAR, stifling test prep, belittling interactions and demoralizing micromanagement.

In the future, HISD must work harder to create school cultures that promote teacher retention. In communities with concentrated poverty, HISD must also do a better job providing schools the same opportunities for stability in school leadership that more affluent communities take for granted.

If TEA took over, an appointed board of managers would roll back progress including Community Schools, protections for children and restorative justice practices. A state takeover would jeopardize existing due-process rights for students, parents and teachers.

An appointed board of managers would likely use STAAR scores to evaluate teachers again, even though standardized test scores have a less-than-10 percent correlation to teacher quality.

Nonetheless, in communities with concentrated poverty, students and schools in HISD and around the country continue to receive inadequate support. At Kashmere, there have been seven principals in the last 10 years. Teacher turnover is between 50 percent and 80 percent at schools in some communities of color, meaning that substitute teachers fill some classroom positions all year long.

But it is not HISD that is the villain. Rather, it is the stranglehold that high-stakes testing has over our schools and our communities.

Inequality is the real problem we should be fighting. Instead, we are fixated on the results of a single test on a single day.

TEA’s preferred solution to addressing “failing schools” has been to hand them over to privately managed charter operators. Other districts that have pursued that path, including Waco ISD, have already experienced buyer’s remorse.

A state takeover would lead to irreversible and discriminatory chartering of schools in black and brown communities, reducing equity and access for the most disenfranchised students.

The charter model is simply incompatible with a public school system committed to serving all students. So-called charter successes are misleading, because charters serve a very different population from public schools. Thirty-seven percent of KIPP Sunnyside students are considered “at risk” by teh state, compared with 92 percent of Worthing High School students just two miles away. In Houston’s Northside, KIPP Generations is 29 percent at-risk, while neighboring Sam Houston High School is 88 percent.

And were the state to take over HISD based on its ongoing “investigations,”we need to remind TEA it is the pot calling the kettle black. Last fall, TEA received a grade of F from state auditors because it failed to follow its own rules for hiring and managing vendors.

An appointed board of managers would replace our elected trustees with no accountability to the voters. As we said in a petition signed by elected officials and many Houston organizations, the state has no business taking our vote and voice away, and if it does, our whole democracy is up for grabs.

Gov. Abbott, we have a right to elect our school board.

Sridharan is a co-founder of Community Voices for Public Education. Mallet-Fontenot is an HISD teacher. Dueñas is an HISD parent.