This morning, the State Board of Education vetoed the far-right Heritage Classical Academy charter application in an 8-6 vote. This is a huge win for democracy and Texas schoolchildren.

Heritage is the same charter whose proposed curriculum included the teaching of Brer Rabbit, Tar Baby, and slave dialect to first graders in 2020. That year and again in 2021, its charter was denied.

The Texas State Board of Education chooses our state’s textbooks, defines the curriculum in public schools, and determines if a charter application gets approved.

The board chair of the proposed Heritage Academy (Stuart Saunders) tried to influence his pending charter application when he and his family donated $252,000 to the pro-charter Freedom Foundation of Texas (FFOT) PAC. FFOT’s contributions were used exclusively to influence this year’s primary State Board of Education (SBOE) races.

The elected SBOE should not be up for sale. With the millions of dollars in out-of-state pro-charter PAC donations this year that influenced SBOE primary elections, we may see a very different SBOE in the future. Read more here.

Today’s vote to deny the Heritage charter is a glimmer of hope. Sometimes, things are decided on their merits.

An excerpt from the Hillsdale investigative series is below. 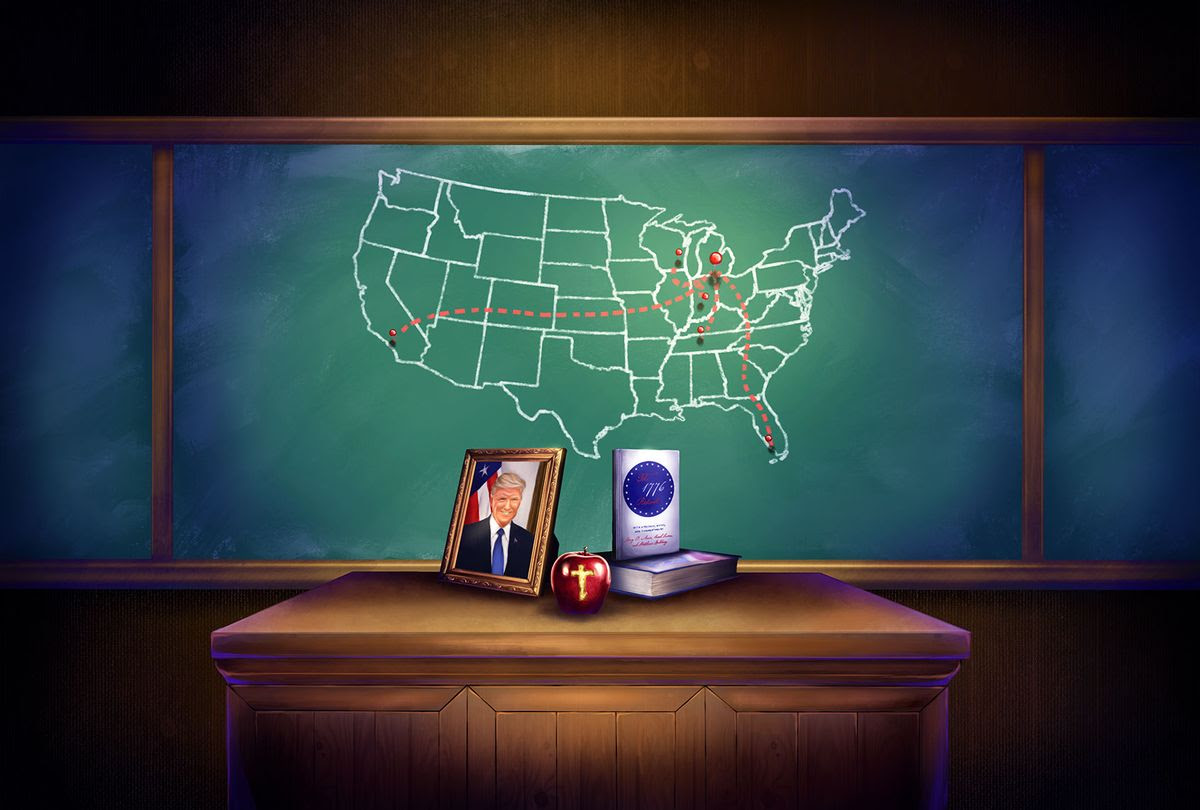 A Chalkboard with a map of the continental USA, with pins leading toward Hillsdale associated schools, and a desk with a portrait of Donald Trump, a copy of The 1766 Report, and an apple with a cross carved into it. (Illustration by Ilana Lidagoster/Salon)

"Teaching is our trade; also, I confess, it's our weapon." Those are the words of Larry Arnn, president of Hillsdale College, a small private Christian college in Michigan that, in recent years, has quietly become a driving force in nearly all of the country's ongoing fights around education. During the Trump years, the college functioned as a "feeder school" sending alumni into the administration and the offices of its allies on Capitol Hill. Hillsdale officials led Trump's controversial 1776 Commission, established to create a "patriotic education" alternative to contemporary scholarship on America's racial history. The school's lecture series and magazine serve as a testing ground for the right's most ambitious and outlandish ideas: that diversity isn't a strength but a "solvent" that destroys national unity; that Vladimir Putin is a populist hero; that Republicans should aspire to lure so many children out of public schools that the entire system might collapse.

To that end, the college has inconspicuously been building a network of "classical education" charter schools, which use public tax dollars to teach that systemic racism was effectively vanquished in the 1960s, that America was founded on "Judeo-Christian" principles and that progressivism is fundamentally anti-American. In late January, the governor of Tennessee announced plans to partner with Hillsdale to launch as many as 50 such schools in that state — something public education advocates fear could be a tipping point in the fight to save public education.

In this three-part investigative series, Salon looks at Hillsdale's multifaceted and far-reaching role in shaping and disseminating the ideas and strategies that power the right. In an era of book bans, crusades against teaching about racism, and ever-widening proposals to punish teachers and librarians, Hillsdale is not just a central player, but a ready-made solution for conservatives who seek to reclaim an educational system they believe was ceded decades ago to liberal interests. Taken together, these linked trends — and the deep-rooted conservative network supporting them — amount to a vision of things to come if Republicans succeed in what they describe as a "war" that "will be won in education." Here is a link to Salon’s entire three-part series on Hillsdale College.